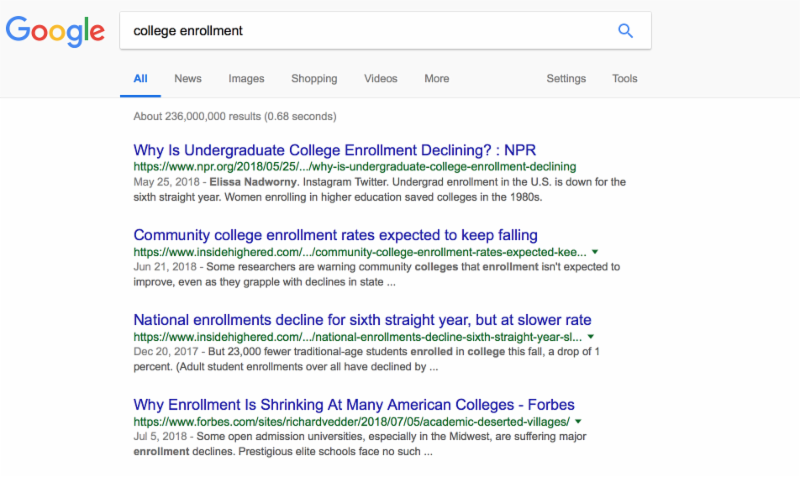 Enrollment: The Here and Now

A quick google search of the term “college enrollment” returns a list of results indicating a sharp and potentially worrisome decline in the number of students choosing to pursue some sort of secondary education (see above). So, what is the state of college enrollment?

A decline in enrollment across the board in higher ed is garnering a lot of attention recently, as enrollment numbers have been reportedly falling for six years in a row. According to Statista, college enrollment in 4-year public and private universities has in fact been declining the past 6 years, though without the inclusion of community colleges, or 2 year degrees, there was actually a slight bump in enrollment. Here’s the graph.

Significant enrollment decline has the potential to have major economic impacts, so it comes as no surprise that much of the conservation around enrollment is focused on trying to address why the numbers are declining, as is evidenced by the top hit on our Google search. The first thing that comes up is an interview done by National Public Radio from this past May titled “Why is Undergraduate College Enrollment Declining?”. Jason Dewitt of the National Student Clearinghouse Research Center in the interview spoke on air with NPR and attributed the decline to two main factors: a strong job market and a major shift in U.S. demographics. The economic factor is simple to understand, an abundance of job opportunities may simply lure students away from pursing a degree, especially as the cost of education continues to rise. The other factor, shifting demographics, is a more complex discussion. Here is a snippet of the conversation between Dewitt and NPR’s Elissa Nadworny, exploring this change:

NADWORNY: And enrollment of adult learners, students over the age of 24, it’s fallen by more than 1.5 million since spring 2011. The other major factor, U.S. demographics are shifting. The number of high school graduates is expected to stay largely flat and then decline. DeWitt explains that’s because of lower birthrates.

DEWITT: It’s easy to forget that, you know, these things, too, kind of go in cycles.

NADWORNY: It’s true. We’ve been here before. in the ’70s and ’80s, schools faced a similar enrollment crisis. And the folks who saved college back then? Women. Today, female students make up more than half of all enrollment.

DEWITT: So the question now is, who is the next group (laughter) to recruit onto college campuses? And it’s likely that Hispanics and first-generation college students are going to make up a greater share of new college enrollment.

NADWORNY: That’s based on the shifting demographics in public schools. And research shows that first-generation students and students of color often have their own unique needs when they step onto a college campus, a change colleges will have to acknowledge, DeWitt says. While they’re at it, the other thing colleges can do to keep their numbers up? Improve retention and graduation rates for their current students.

This conversation explores a small piece of the puzzle when it comes to understanding the changing landscape of higher education. The three other articles that showed up at the top of our Google search for “college enrollment” also provide interesting conversation points. Inside Higher Ed warns of a sharp decline in community college enrollment that is forecasted within the next ten years, while another IHE article written six months earlier shines a more optimistic light on the slight increase that undergraduate enrollment has experienced recently. Ohio University Professor and Forbes contributor, Richard Vedder discusses how post-collegiate earnings may be affecting enrollment by widening the gap between elite schools and less-acclaimed institutions.

Discussions around college enrollment are plentiful, and there are many facts and perspectives to consider. We look forward to continuing this conversation in our next newsletter.