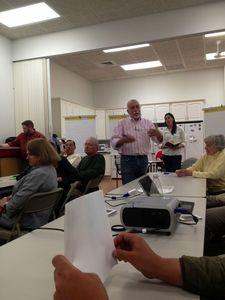 CANAAN — Those attending Friday’s economic development visionary session clearly love their town and are anxious to find ways to make it thrive. The discussion was lively during the two­hour meeting held in the conference room of C.A. Lindell’s hardware store. It was facilitated by representatives of Goman + York, an economic development consulting firm hired through a state grant by the Northwest Hills Council of Governments to assist eight area towns in ways to promote their business scenes.

Michael Goman, who said his company defines economic development as attracting investment capital, talked about the many issues surrounding such initiatives.

“Our motto is to keep the process swift, simple and certain,” Goman told the approximately 25 who attended.

They also look for many mini successes along the way, he said. Constraints include matters of infrastructure, traffic, marketing, cost, politics and different philosophies.

GIVING SOME local statistics, Gorman said Canaan is listed as having a population of 4,112 in 1,762 households. Its median age is 46.7 and median disposal income is $40,195. Per capita income is about $26,000. It has businesses, such as Stop & Shop and McDonald’s, that bring people in from other areas.

The town’s newly formed Economic Development Commission has been focusing on bringing in a hotel and urgent care facility. A market feasibility study has been passed out to 14 prospective hotel chains. Goman said they should focus on franchises because single­owner motels are practically nonexistent.

Sam Leary, owner of Blackberry River Baking Co., brought up the idea of Airbnb, a website for people to list, find and rent lodging. The consultants said some people are not comfortable with that type of arrangement, but those and a hotel could certainly coexist.

“It seems to me they’d already be here if the excitement was here,” he said.

Brian M. Ohler, a Republican candidate for the 64th House District seat, said he speaks for a large majority of those 50 and under.

He said there is a large migration of that age group out of the area because of the lack of jobs.

“You need to provide excitement for people to come here and stay here,” Ohler said. “We need to create middle­class jobs.”

He noted the only jobs that exist for unskilled workers are those in diners, pizzerias and gas stations. The larger factories, such as Becton­Dickinson, are seeking a skilled workforce.

“We need to attract businesses where people can make $50,000 and don’t have to work three jobs,” Ohler said. “The big focus should be to bring people back.”

Goman said they’ve heard from employers that people want rental units and they’re hard to find in Canaan. People are commuting from Winsted and Torrington because of that, he said.

TERRY DOUGHERTY of Mountainside Rehabilitation Center, who is chairman of the Economic Development Commission, said Mountainside has a hard time finding employees because of the lack of housing. Hower added that the lack of public transportation adds to that dilemma.

Rowlson agreed, noting that because there are no highways in the Northwest Corner, transportation does become a challenge.

Christian Allyn, a college student, said the regulatory problems must be addressed before talking about excitement. He said the Planning and Zoning regulations are difficult to comprehend.

When Dorothy Cecchinato asked about the feasibility of attracting small retail shops, Goman said the face of retailing has changed because of the ability to purchase online. While most towns are losing retail businesses, those that offer food and beverage are on the rise, he said. Arts and entertainment is another growing area.

Ohler talked about the need to give Canaan an identity. “There’s a great opportunity for expansion here,” he said. “The reality is that Canaan is still a pass­through town. People need a reason to stop.”

The second strategy session was held Saturday. The wrap­up is set for Tuesday from 7 to 9 p.m.