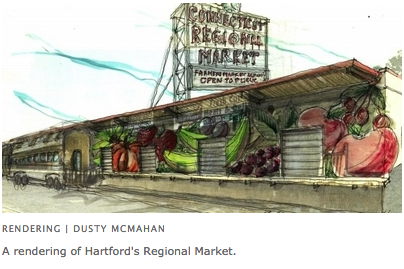 A consultant hired to develop options to spruce up Hartford’s Regional Market has released a conceptual plan that includes space for food trucks, live music and winter use.

In a recent report, Goman + York pitched several upgrades to the 32-acre lot including space for food trucks, live music, winter use, a community garden and gathering areas, according to a preliminary report.

The recommendations also include a makerspace for food processing, and sponsorship or branding partnerships. Common area ideas include rooftop uses, restaurants, brewpubs, distilleries and collaborative workspaces for entrepreneurial companies.

Immediate plans are aimed at stabilizing the market’s current tenant base, addressing operational and security issues, creating a marketing plan and plotting a five- to 10-year plan to address capital improvements and other recurring investments.

The expansion could “play an important role in supporting food processing and distribution” for businesses in the area, the report says.

*Article as seen in the Hartford Business Journal