When you start a family may indicate economic advantages, recent study suggests.

The Importance of the Plan of Conservation and Development

When you start a family may indicate economic advantages, recent study suggests. 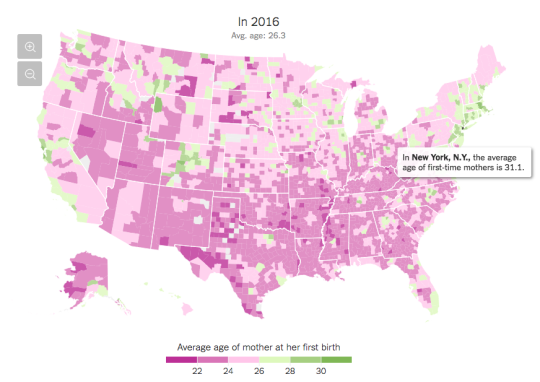 “The Times, They Are A-Changing” – Bob Dylan

Right you are, Bob. According to a recent article by the New York Times, this is especially true for first-time mothers with a college education. The study, conducted by economist Caitlyn Meyers for the Times, points to data that shows how old a mother is when she has her first child is indicative of more than just changing times. The study looked at four decades of births in the U.S. and found that the age when a woman has her first child varies not only by generation and time, but also by geography, and perhaps most notably, these geographic lines also align with many of the same lines that delineate educational achievement across the country.

In 2016, the average age of first-time mothers in New York was 31.1 In San Francisco the average age was 32, this was the highest average age of first-time mothers. While it’s easy to reach the conclusion that these densely-populated areas are simply urban hubs where mothers are more likely to be engaged in careers that encourage them to hold off starting a family, the Times argues that this is missing a bigger point. That point being that children born in different geographies in the U.S. are inherently set up for different advantages and ultimately different economic futures.

Interesting. How does this affect me?

That depends on who you are and where you are. To delay starting a family is a national trend, and one that is affecting cities and towns across the country. For some areas it may indicate a need for advanced strategic planning for fewer school-age children utilizing resources and town facilities. For other places it may mean harnessing the increased buying-power of more people without the financial restraints that children normally bring. Yet, other places, it may simply mean keeping an eye on where this trend is going. As always, knowledge is power, so keeping tabs on your area demographics and how they are changing and evolving is a critical first step. If you’d like to learn more about ways to do this, drop us a line.